Handy Hands is a company dedicated to the beautiful art of tatting and related needle arts.  We were founded in 1990 on a strong foundation of prayer and providing outstanding customer service, and has continued to grow in reputation and products offered, incorporating into Handy Hands, Inc. in 1995.

From simple beginnings, we have grown into an industry leader, shipping all across the globe.  Handy Hands is proud to offer the Lizbeth® and Liz Metallic™ lines of thread in a stunning array of colors, as well as five types of shuttles and numerous books.  Years later, the commitment to excellent customer service and glorifying God remains the same. Look to Handy Hands for all of your tatting supply needs!

How Our Story Began


Handy Hands has always been a family affair from the start.  In 1988, at the urging of her mother, an avid admirer of tatting’s beautiful delicacy, Barbara Foster took an afternoon class on tatting and found herself truly hooked on the art.  In the months that followed, she was eager for more information and instruction, and saw a gap in the market for instructional material on tatting.  Following a suggestion from her brother-in-law that she pave the way and write the instructional book, she took it before the Lord in prayer and soon got a sense that she should indeed follow this avenue.  Little did she know then what an adventure it would turn out to be!

In 1989, Barbara set up a tent in her dining room and used a 35 mm camera and a typewriter to create her own book on needle tatting.  Other family members helped with assembly and learned to tat as the business began to grow.  A second instructional book on needle tatting soon followed, with further revisions and editions coming in the next three years.  Incorporation happened in 1995, and since then, the business has continued to flourish.  The Lizbeth® line of premium thread came out in 2008, and has become popular with crafters in many art forms! In addition to the Lizbeth® thread, Handy Hands also debuted Liz Metallic™ thread in 2018, and manufactures five types of shuttles in a rainbow of colors.  Handy Hands is also a publisher, with a total of seventeen books published under its press.  Family and faith are still of the utmost importance to who we are as a company, as we seek to glorify God in all that we do! 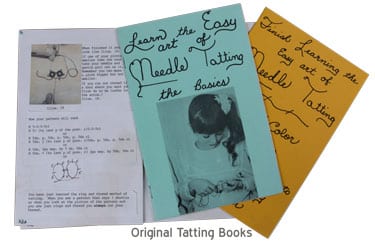 Notify me when product is back in stock We will automatically email you when the product arrives in stock so that you can return to our site to purchase the product. Please leave your valid email address below and make sure [email protected] is added to your address book to ensure you’ll receive our notification.